Mexico ended tournament with a victory over Germany 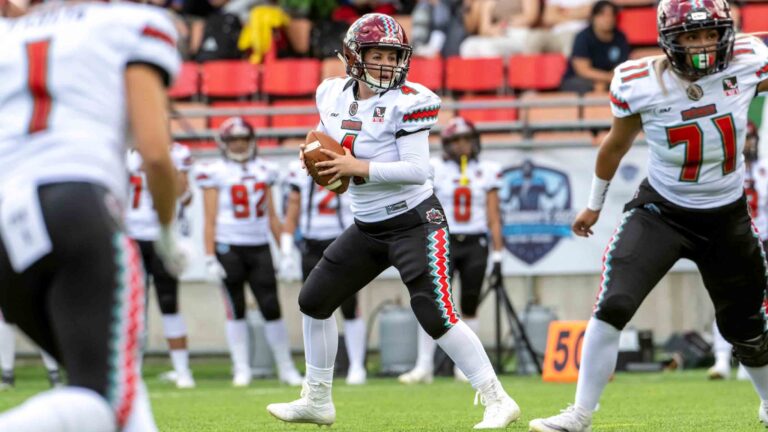 Team Mexico defeated Team Germany convincingly 28-0 in a game that was much tougher than the score would indicate. Despite the final score, both Team Mexico and Team Germany played tough defense and made scoring a difficult task.

Team Mexico jumped out to an early lead, scoring on a 15 yard pass from quarterback Paulina Diaz to receiver Marlene Gutierrez in the first quarter. The touchdown capped a 72-yard drive, of which running back Andrea Romero accounted for 44 of those yards on the ground. The two point conversion was a successful pass by quarterback Paulina Diaz to receiver Ana Barbosa, making the score MEXICO – 8, GERMANY – 0.

The score would remain the same heading into halftime, with both teams playing tough defense. Team Mexico spent most of the second quarter on Team Germany’s side of the field, but were unable to add to their lead. Team Germany found their way to Mexico’s 35 yard line before being stopped with 21 seconds left in the half.

The third quarter proved to be when Team Mexico would separate themselves from Team Germany in this competition. Running back Andrea Romero scored on a 37 yard run in her team’s opening drive. The two point conversion was a successful run by Karla Granados, making the score MEXICO – 16, GERMANY – 0.

The rest of the third quarter would be centered around very good defense from both teams. Team Mexico was able to force a fumble on team Germany’s side of the field, and gain valuable field position. Germany linebacker Susanne Erdmann would make that field position moot, by recording 3 consecutive sacks to put Team Mexico back at midfield, ending their chances at scoring again. Unfortunately, Team Germany muffed the ensuing punt return, giving Tema Mexico yet another chance. They would not waste that chance, as quarterback Maria Cruz found receiver Thania Garcia in the endzone for a 4 yard touchdown. The extra point attempt was unsuccessful, making the score MEXICO – 22, GERMANY – 0.

The fourth quarter was controlled by Team Mexico, as they were able to get into the redzone twice. With only 50 seconds remaining in the game, Team Mexico finished a 53-yard, 3 minute drive with a 11 yard touchdown pass from quarterback Tania Guzman to receiver Diana Cardenas. The extra point was unsuccessful, making the final score MEXICO – 28, Germany – 0.